As most of you know, I've been in the cosplay community since 2007. I have had my fair share of group cosplays, and most of them flopped, if I'm going to be quite honest. I'm obviously not trying to discourage anyone from getting a group together and cosplaying your favorite characters from your most favorite series. Specifically, I want to talk about the "dos and don'ts" and how you can better learn from my experience without having to deal with the heartache yourself.

My first group cosplay was waaaaay back when in the Homestuck times. I got really into the series and decided that I wanted my own group of trolls. So, I got my closest friends at the time to pick their favorite trolls and start getting stuff together. Unfortunately, my friends were (at that time) very lazy, non-committal, and didn't take this seriously. It was also before the era of Ben Nye, so I literally bought a gallon of grey paint that was a little more blue and it just. . . . looked atrocious. Half of the group were ready before the others, while the stragglers were being lazy about getting finished. I also made the grave mistake of buying most of the pieces and making the shirts without getting payment from people. I slaved for this group, making everyone's horns (terrible attempts, but attempts nonetheless). Basically, everyone just had to show up with pants and try to get painted.

The half that were ready before everyone else, ran off to the con, while the rest were left behind to finish getting ready. Well, once the second half was ready, the first was ready to come home. This was infuriating because large cosplay groups were basically unheard of at this point and I just wanted to do something not many others had done. There was a lot of screaming on my end. It was extremely stressful, and I lost friendships over it.

DOS AND DON'TS: Specifically for this group, I should not have just invited my friends. They were not as passionate as I was in the project and it obviously showed. I think there is only one photo of this group, and it almost caused me to quit cosplaying. If you are planning a group cosplay, find people who are just as driven as you are. It will be difficult, but take your time finding the right people, they'll show up. Interview people if you have to. More and more groups now are doing that to make sure that that person will be a good addition to your group and not bring everyone down with them.

Speaking of interviews, I was interviewed for the part of Sailor Uranus for the Pretty Guardians, which I was more than excited for. Originally, I wanted to be Mercury (who was my babe) but found out that Mercury was already taken by Beesinginc (check her out on Instagram) so I thought, "Why not?" and applied for Uranus. They met with me in a public place and started talking. "Why do you wanna be Uranus? Have you read Sailor Moon? Cosplay Experience?" We spent about an hour talking, and they were ecstatic with me! I was just excited to be in a group that I felt would appreciate me. Organization was a little off during the two years and five months I was in the group. This is where it gets a little rocky. I don't want to make it seem like I have any hard feelings for the group. I am so thankful for the opportunity to be a magical girl, to rise to a place where I could be recognized in the cosplay community, and meet people who love Sailor Moon as much as I do. BUT, it's extremely difficult to find people that share the same level as passion, while also maintaining organization in the group and in real life. I admit that I had problems in the group, but I also was more than willing to work towards a solution.

Some of the girls were not that way. And that's their own prerogative. I wanted us to start selling prints, and I had ideas on how we could create a sustainable income that would be able to put money into our builds or getting us to conventions so that we could see more fans and meet more people. I had big ideas that I thought others wanted too, but I was wrong, and that's okay. There was a little bit of "bullying" in the group, but I never saw it first hand. Some of us felt left out when others would invite only part of the group. And there was resentment. Communication is absolutely key in all aspects of relationships. Whether it is romantic or platonic, familial or friendship. If you do not communicate, especially with feelings of hurt or doubt, those relationships will fall apart. If someone says something to you that you don't like, breathe for a second and then come to that person and tell them, "I don't appreciate what you said to me. That's not okay." And work towards a solution. Don't bottle it up and let it turn to feelings of hostility. That isn't right and ruins relationships. I have lost a few people that I thought were my friends in the group. I actually get triggered when I see them on Instagram or Facebook,, because there was no closure. Was I at fault for some of this? Probably. Almost definitely. But I know that I educated everyone, and everyone knows they could have talked to me if I hurt them. Because I wanted to stay friends with them. I really did.

DOS AND DON'TS: For this group, there was obviously some things learned from the previous group I participated in, but there were also things lacking. There was still not as much passion as the others, and the organization was terrible. It is extremely difficult to get 10+ people together to all sew, but you also need to know how seriously these people want to take it. There were some members that barely showed up to meetings, crunched out their cosplays at the last second, and there were others that showed up all the time. As a leader especially, you can't be too lax, but also not too harsh to your members. Unfortunately, our leaders were really lax and weren't as daring as I personally wanted to be. Allowing communication to flow freely is also extremely important. Don't take bullying. No one should ever feel excluded from the group. And unfortunately, I did. I felt like I was always disregarded in my opinion and that I was only around because I made an amazing Uranus. Because I had that drive. I know others in the group did, but to avoid harassment to the other members, I won't name names. In the disbandment of PG, no one was innocent. Everyone contributed something to the downfall.

On a happier note, my next group that I was a part of for one photoshoot, was Curvy Kitty Cosplays Inuyasha group. Growing up, I watched Inuyasha and I was interested, but watching it again as an adult, I loved it. I immediately fell in love with Sesshomaru and felt our personalities really matched well. Ren Chan headed the group, getting the main cast together and slaying as Naraku. She's passionate, she's determined, and she pulled it out. There were a few hiccups, i.e. people being slow to get their cosplays, shipping companies being turds, but everyone was really passionate. I also had the opportunity to make Koga's cosplay as well and I was super happy with how it turned out. The group itself was amazing, once we really started to get down to the wire. Ren Chan was really on top of everyone about getting their work together and she left no room for slack. This is extremely important, especially in groups that it's not just a one-time thing. She has done so much for her cosplay group and I hope she really knows it.

She also spent 5 months, along with Yomuchan pulling together the Wreck-It Ralph Breaks the Internet Princess Group. She got together 14 people. FOURTEEN. And made it WERK. She sat there at the photoshoot for 10 hours, making sure we all looked amazing and that we look like the Princesses we were meant to be. She even tried to let me be Elsa, because she knew I already had the wig, and that I liked her character, but she called her first. I insisted that she be Elsa, and I would choose a different Princess. Tiana has been my favorite since the movie, so I chose her. I know I am not black, but she's amazing. I refuse to black face, and I have other opinions (but won't get into them). Ren Chan put together a guide for how the characters look, how the makeup should be, as well as poses and clear deadlines for when things needed to be finished. There was so much excitement when I offered to make the Onesies that go along with each princess ( you can find them in my store!) for a nominal fee, almost everyone threw the money at me, and I got em all done. I made sure to take great care in that, while Ren Chan was breaking her back making sure we looked perfect.

During the shoot, there were minor hiccups, but it's bound to happen with 14 adults, a photographer, and a child (our sweet Vanellope). She did not stay with us the whole time, but while she was there, everything was good until the end, when Sammy was of course exhausted. After she left, we kept on chugging, only stopping for dinner and a quick breather, then we continued shooting. There were only a few hiccups after that, with one of our cast members leaving early due to illness. The shots came out amazing and I couldn't be happier with how gorgeous everyone looks. 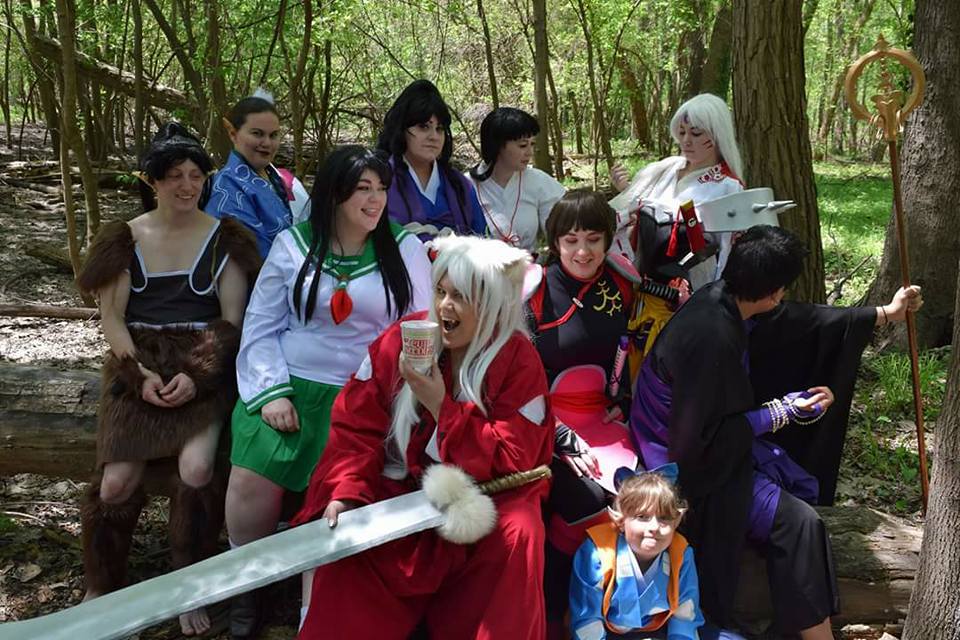 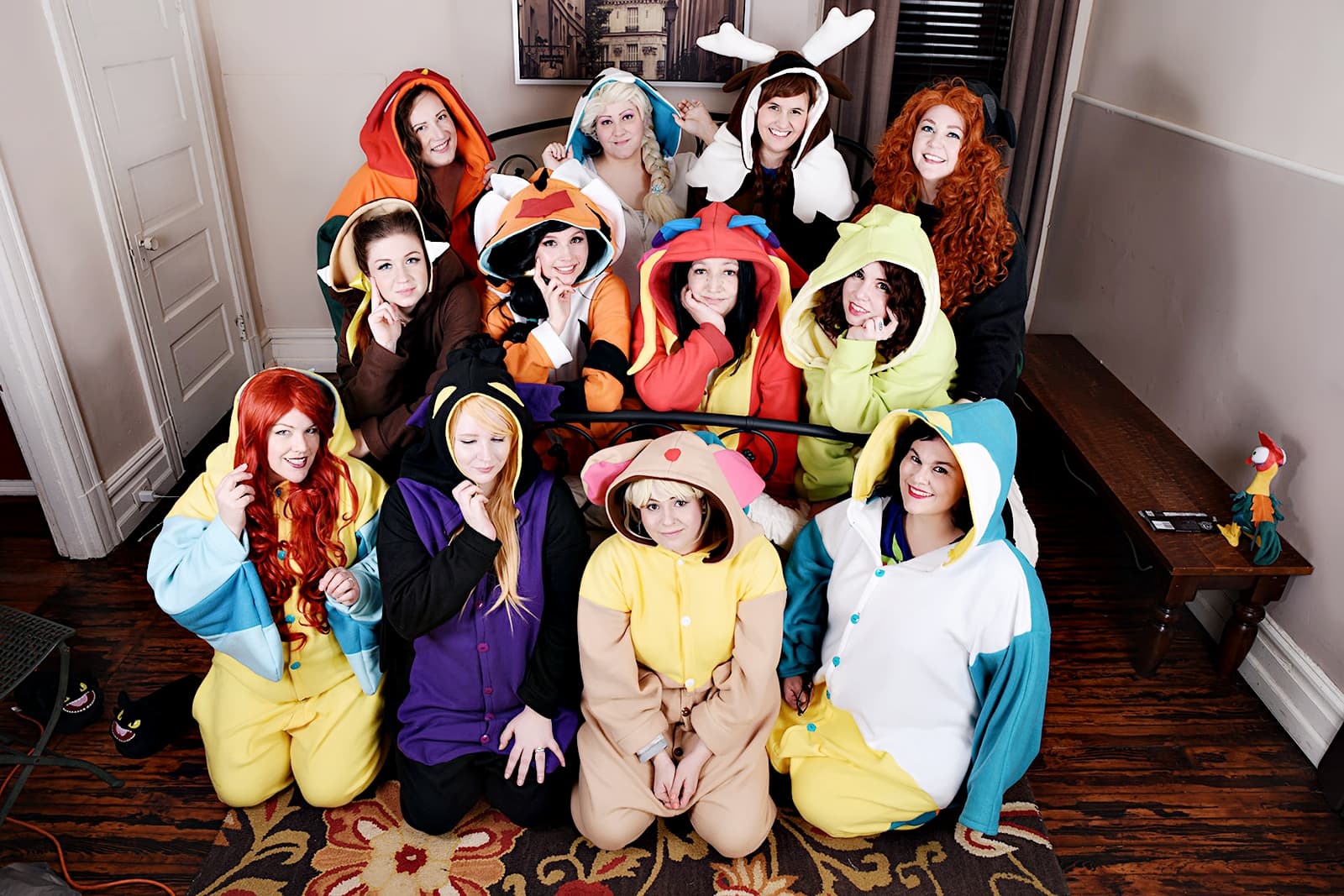 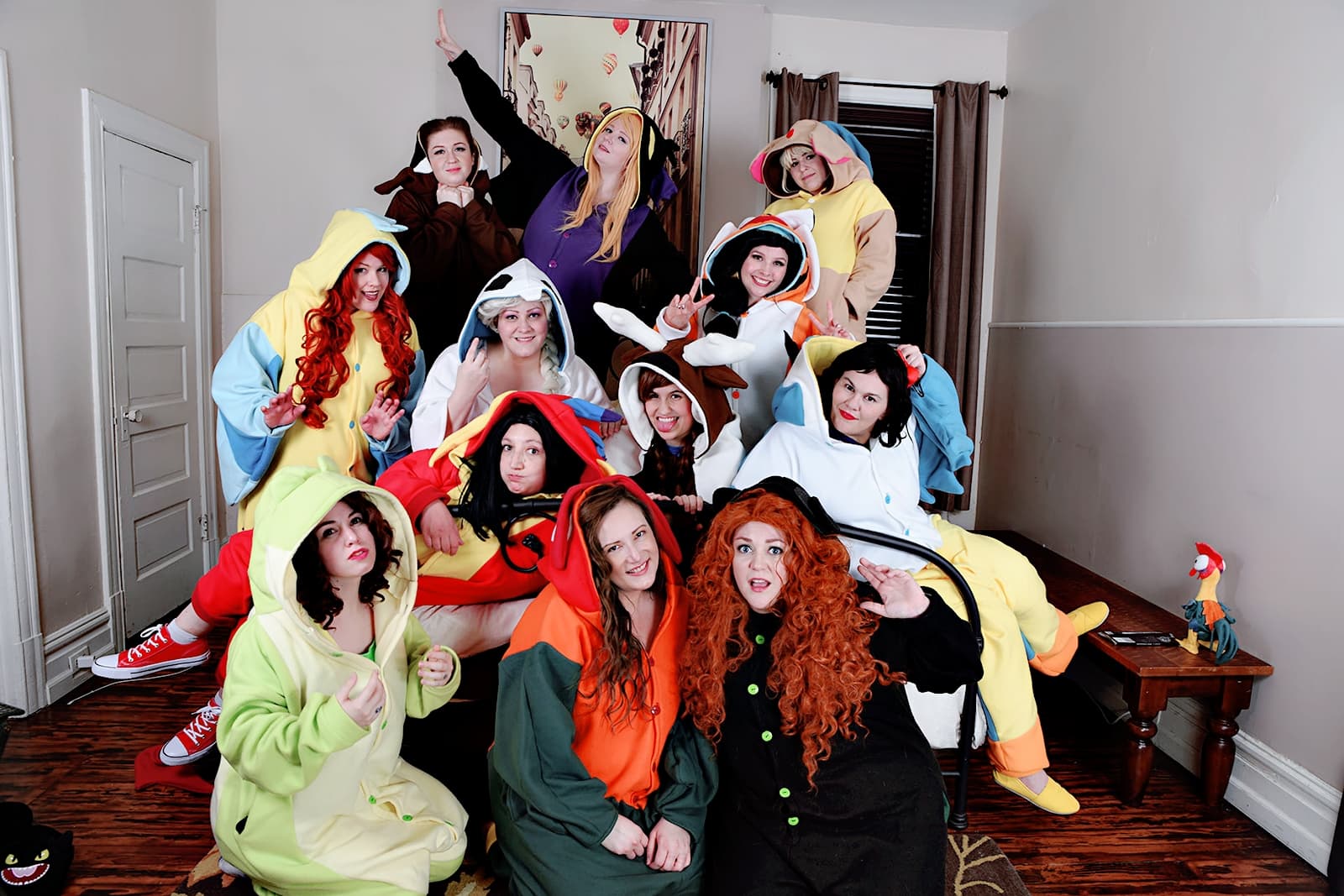 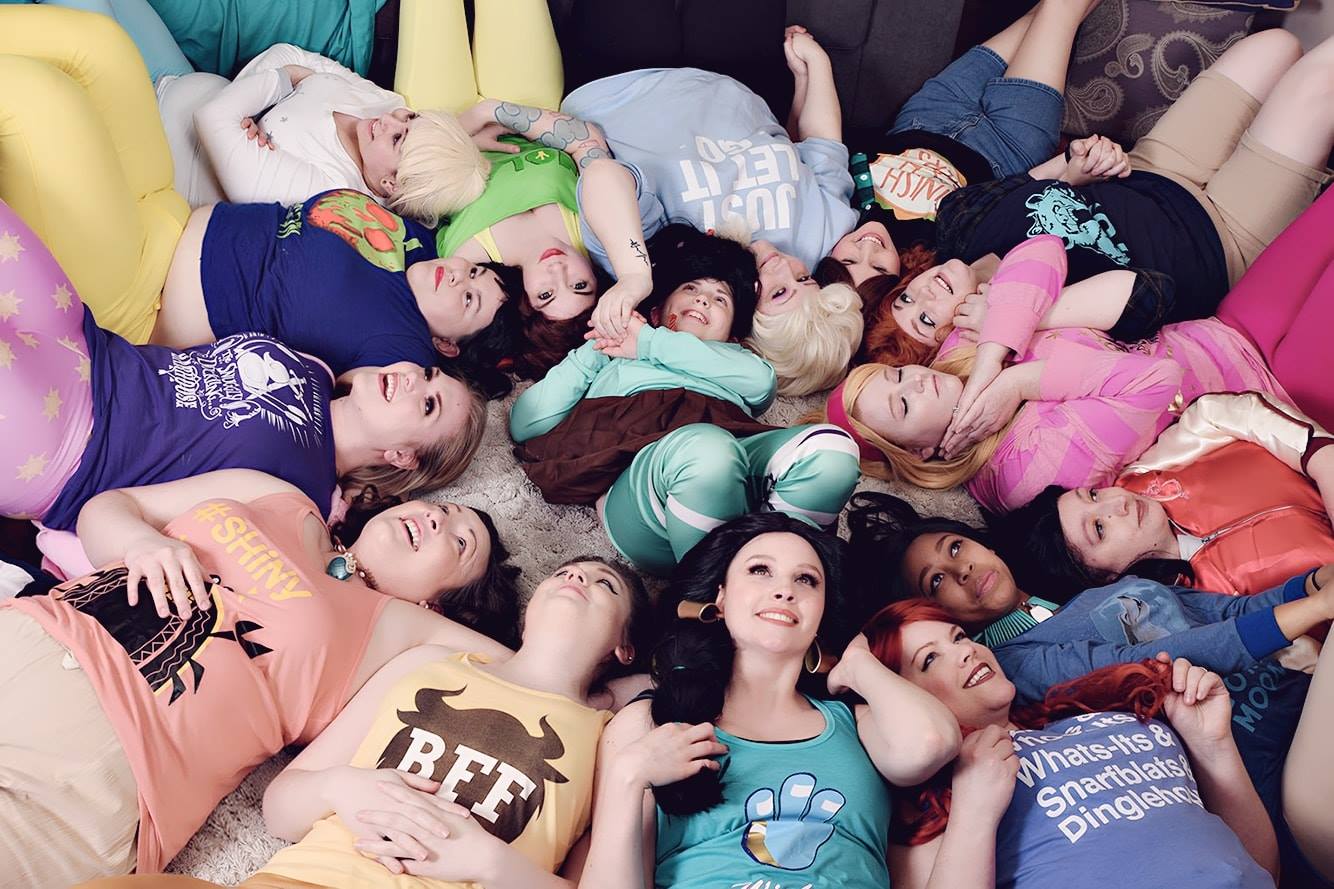 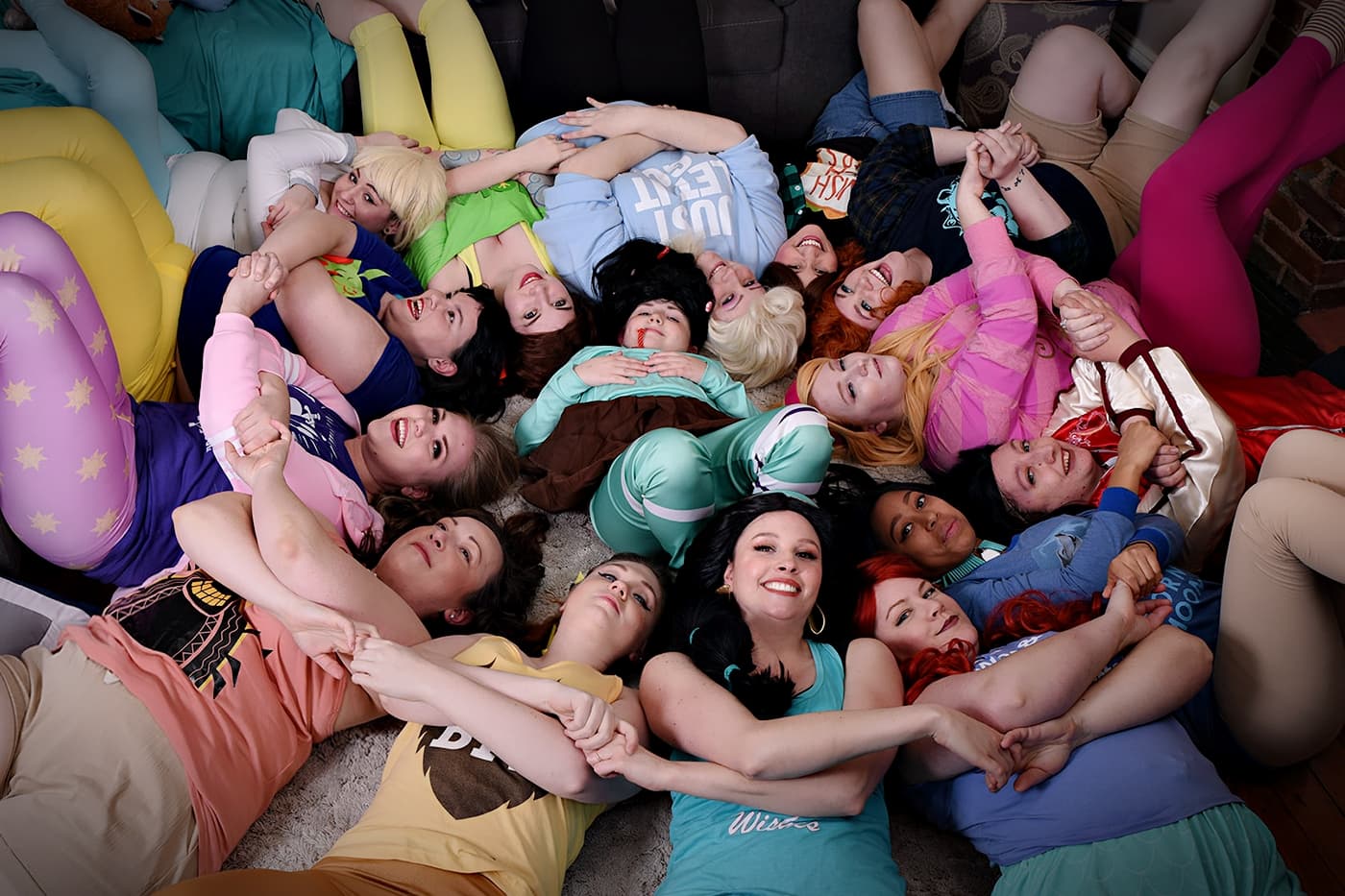 Finally, I get to talk about the super awesome group I am currently in! STLHeroAcademia. I was interviewed by Deku and Ochako, who are sisters. They had an application that I filled out, and then added more questions in the interviewing process, and even brought Kirishima to make sure that we would get along. It lasted about 35 minutes and they just asked really deep questions to make sure that they weren't going to be getting a huge jerk that would bring down the group. They talked about how they ran the group, and even talked about activities that they did as a group. They set pretty definite deadlines for costumes, and there is such a diverse cast with different skills, so if someone needs help with a part of their cosplay, they know they can go to other members and talk it out. I have had no problems thus far, besides people not being able to hit some of the deadlines due to life problems. The photoshoot I did with them for our villains came out amazing, and while there was a little bit of pacing issues, it will always happen with larger groups. I am super excited to see how this group winds up, but I feel it is extremely positive and well worth my time.

I wish you the very very best in your group cosplay endeavors and hope you have learned from my hiccups and mistakes and become as successful as you dream!

Why I started Cosplay